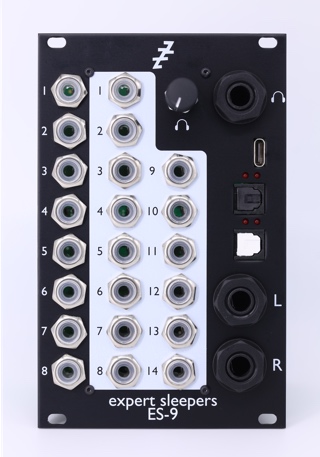 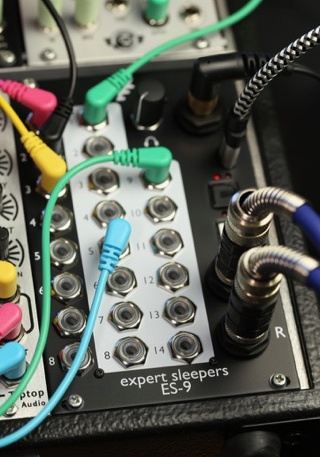 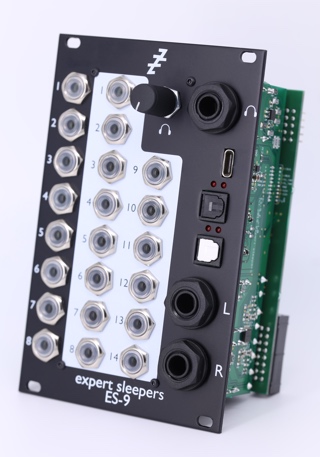 The ES-9 is a Eurorack 16-in/16-out USB audio interface, with DC-coupled inputs and outputs that can be used for both audio and CVs.

With its balanced 1/4" main outputs & headphone socket, it's the perfect one-stop solution for integrating a modular synth and a laptop/tablet, either in the studio or when playing out at a gig.

The ES-9's 14 analogue inputs allow simultaneous tracking or mixing of a large number of sound sources in your modular, while the 8 DC-coupled outputs are perfect for controlling the modular with Silent Way, Max/MSP, Ableton's CV Tools, Bitwig Studio or similar, or for sending audio out to the modular for processing.

For even more outputs (up to 48 more), the ES-9 can be expanded with the ES-5*. It also has a pair of S/PDIF sockets for connecting other digital audio gear.

The ES-9 also provides a pair of MIDI sockets (via a breakout).

* The ES-9 has a dedicated pair of audio channels for the ES-5. Unlike the ES-3 or ES-8, you don't lose audio outputs when using the ES-5.

The ES-9's specifications are as follows:

What's in the box

A USB cable is not included. You will need a USB C-to-USB C or USB A-to-USB C cable, depending on what you'll be connecting the ES-9 to.